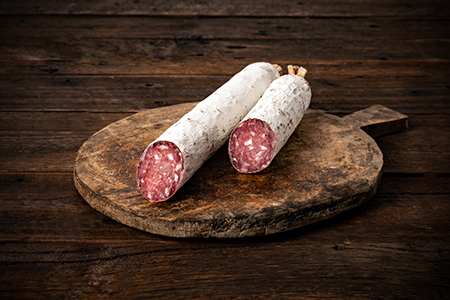 Felino is one of the many varieties of Italian salami. It originates from a small country village called Felino, which is located very close to Parma, the same home town of its cousin Prosciutto Crudo. Its production dates back to the beginning of the 1st century and was first represented in the 'Battistero di Parma' in the 7th century where Benedetto Antelami painted two salami, which due to their unique size and shape, can be recognised as Felino salami. Nevertheless, it only became famous at the beginning of the 19th century along with Prosciutto Crudo, Coppa and Culatello, which are some other Italian delicacies from the same area.
Apparently it was considered a very rich product, particularly appreciated by the local aristocrats, and it was even more expensive than Prosciutto. Nowadays, Felino is very popular outside of Italy, especially in France, Germany, UK, Switzerland and Russia.

Felino is perfect to complete any cheese and salumi boards and is one of the most used salami for the Italian antipasto.

It can also be enjoyed in a simple panino with some brie and lettuce.

As it's usually very long, it's better if Felino is hand-sliced diagonally creating oval slices. To taste it at its best, each slice should be as thick as a pepper grain (3-4mm).