Want to guess where the name Capocollo comes from? 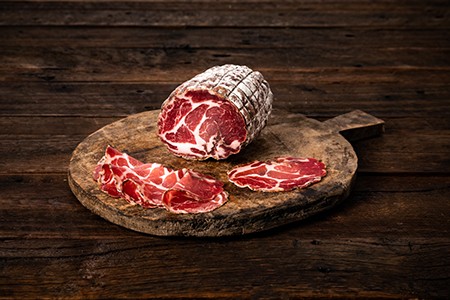 Capocollo means "head" (capo) and "collo"(neck), which are the parts of the pork that are used to make it. Like all the other salumi we have introduced to you in the previous episodes, Capocollo dates back to the period of the Roman colonisation of Greece. The first written evidences are from the 17th century, but the most important one comes from Naples in 1809.
Capocollo originates in Calabria where the production of small goods from pork was a very traditional moment shared by the whole family. As per tradition, the animals were strictly killed and butchered by the head of the family, watched by the other members, who were getting ready to save all the parts of the animal.
If you are not sure whether you are eating Capocollo, look for the typical thin white veining on the cut face.

You can use it to make panini, wraps and sandwiches, but the way many Italians like it the most is on a pizza napoletana, with burrata… delicious!

To taste it at its best, you should slice it very thin, ideally with a slicer rather than the knife.