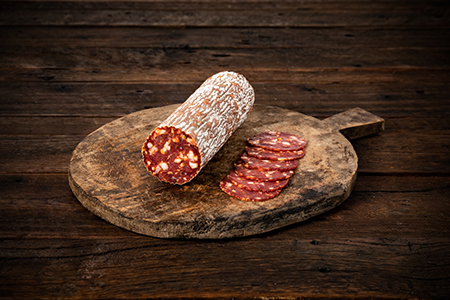 While we can only estimate the time of the first appearance of Sopressata -  sometime during the 18th century - we know for sure that it comes from the south of Italy, and in particular these regions: Calabria, Basilicata, Puglia, Abruzzo.
Sopressata is a very traditional variety of salami and has a few peculiarities that it's worth analysing. Compared to the other varieties of salami, Sopressata, originally, was rigorously cut by the knife and not minced. Additionally, it is made exclusively with lean cuts of the pork making it a lean meat, with a thicker texture than other salami.  While the Sopressata is from the south, there is a sister version of salami called Sopressa, which is produced in the north of Italy, more specifically in the region called Veneto. Here, it is very commonly found on the dinner table.
We tried to find the differences between the two, but the only discovery we've been able to make is that Sopressa from Veneto is softer, and can be made with or without garlic. The original recipe is unknown as every family has their own way of making it!

There is a famous traditional Easter dish in Naples called Pizza Chiena, which is a savoury cake made with pizza dough. The filling includes different varieties of cheese, salami and sopressata.

If you want to taste it at Veneto style: place it on top of some soft polenta with gorgonzola and enjoy!