Looking for a lean meal? Have some Bresaola 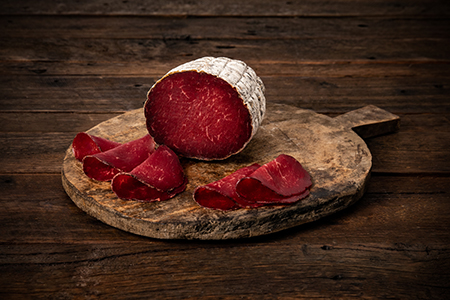 Among the finest cured meats on the Italian gastronomic scene, bresaola has been  known for at least 600 years, with the first written records of its production dating  back to the 15th century. Bresaola remained a niche product until the end of the 19th century, when its production began to intensify following the discovery of a very famous recipe: Bresaola, rocket and parmesan. While remaining artisan, its production continued to grow and started being recognised internationally, with its first exports to nearby Switzerland in the 90's. Nowadays, Bresaola is still a protagonist of the Italian kitchen, where it is used both raw and cooked.
The undisputed queen of diets, because made of a very lean steak, is mainly produced in the province of Sondrio, between Valtellina and Valchiavenna, two Lombard valleys nestled between the Western and Eastern Alps, a natural setting of rare beauty, between rivers, natural paths and wide green expanses. The uncontaminated air of the area, which seems not to have been touched by man's hand, is transferred to the bresaola through the fodder of the pastures, creating a product with a pleasant aroma and a delicate flavour. In Sondrio, Italians usually celebrate an exciting Bresaola Festival on the 21st of June each year, making it a unique destination.
Today bresaola is also appreciated in various foreign countries including Australia.

Despite it's early origins - dating back to more than 2000 years ago - the success of bresaola is recent and dates back to the late 90s, born from the marriage with Parmigiano Reggiano and rocket, in a dish, which has become national-popular, in which it is used marinated with lemon juice, covered with Parmesan shaves, rocket, extra virgin olive oil and pepper: the Carpaccio. Easy, healthy and satisfactory for both body and palate, the Italian carpaccio is a summer dish you can offer to your friends and family starting with your kids!