The eldest salami of all..Cacciatore! 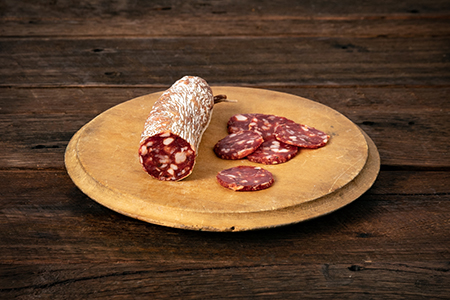 Cacciatore is the oldest salami ever produced in Italy. Historians are not sure how to date back its first appearance on the Italian table, but there are evidences that it may have first been made when the Italian region of Tuscany was reigned by the Etrurians, about 700 years ago. Etrurians farmers, which were famous for hunting pigs and boars, found a way to create long-lasting and nutritious snacks by drying their meat with some added spices. Cacciatore salame, which stands for "hunter", has been in fact named after its use as a food that hunters could take on their hunting trips. Depending on the length of their trip, they used to make different sizes of salami which, being rich in proteins, salt and fat, were helping them to replenish their energy. Additionally, Cacciatore salame was offered by the locals as a gift to the people who came to hunt in their territory.
The creation of Finocchiona represents a more recent evolution of the old Etruscan Cacciatore. Finocchiona dates back to the early centuries of the Middle Age when the famers were used to add more flavoured and tasty spices, like fennel, to match wines that were much more acid and strong than the ones we currently drink. The fennel, which was a cheap spice compared to pepper, used to mask the poor quality of the pork and wine. Now, Finocchiona is one of the tastiest salami.

Cacciatore  and Finocchiona salami can be enjoyed sliced in a panino or be added to a  cured meat and cheese board for everyone to enjoy.