Speck. Is it German or Italian? 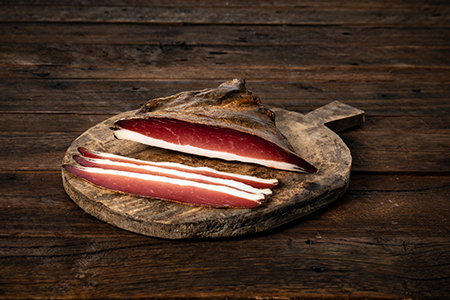 Speak first appeared in the literature in the 18th century, but it seems that the farmers started to first produce it back in the 13th century. Speck, which means "thick, fat" in German originates from Alto Adige, the northest Italian region that includes one of the most famous mountain range in the world, the Dolomites.  This area, being on the border with both Germany and Austria, has and still is receiving a great influence from these cultures: all people living here speak both Italian and German.
Speck is a tradition that all these countries share. It's a kind of prosciutto crudo, but slightly smoked and originally aged outdoor. It was first produced by the farmers to preserve the cut of the pork they were killing during Christmas time, but it is now enjoyed in many ways in this Alpine region, as well as all over the world, including Australia.

Can be eaten simply as it is with black bread, butter and baby cucumbers, or in much more complicated recipes like the Canederli with speck, or savoury baked cakes, or polenta tarts.

Usually cut by the knife doesn't need to be sliced too thin to enjoy the flavour in a panino. It can also be cut into cubes for pasta and other cooking recipes.